Explanation on how airplanes fly to a high schooler?

Explanation on how airplanes fly to a high schooler?

An #aeroplane is a flying machine with a fixed or variable wings designed for flying and is generally powered by engines. It gets the neccessary lift force due to its wings and gets the propulsive power from the engines. Firstly, let us know about how the massive aircraft gets lifted up in the air.

The Principle of Lifting force of Aircrafts:
An aeroplane lifts up in the air due to the huge aerodynamic lift provided by its wings. The wings are in the shape of an Airfoil. If we see the cross-section of the wing clearly, we will find that the upper surface of the wing or the airfoil is curved in shape, more than the lower surface. When the aeroplane moves through the air, the air flows past around it.
When this high speed flowing air strikes the upper surface of the wing, it changes its direction as well as its speed.
Similarly, the air below the lower surface of the wing moves comparatively slower than the air above the upper surface.
The high speed air has less pressure and similarly, the low speed air has high pressure. Therefore, we see that that the bottom surface has high pressure and upper surface has low pressure. This pressure difference between the upper and lower surface creates a force called Aerodynamic Lift or simply Lift.
This principle is commonly known as Bernoulli’s Principle. 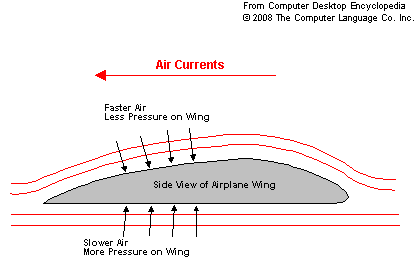 Another explanation of lift is by the famous law—
Newton’s Third Law of Motion which states that
“For every action, there is an equal and opposite reaction.”

What is Angle of Attack?

Angle of attack is the angle between the chord line of the airfoil and the direction of the travel or relative wind. Chord line is the line drawn from the front edge to the rear edge of the airfoil.

How the aircrafts gets the Propulsive force to move? :

The aircrafts are generally powered by piston engines (fitted with a propellor) and jet engines, which work on the principle of Newton’s Third Law of Motion. Let us know about each of these one by one.

Piston Engine: Piston engine is a type of reciprocating engine where the engine converts pressure into a rotating motion. In the first stroke the piston moves downwards. the pressure inside the combustion chamber decreases. This opens an inlet valve from where fuel and air mixture is injected inside it. In the second stroke, the piston moves upwards, compressing the fuel-air mixture. The mixture gets heated up. Then a spark plug fires into this heated mixture. The mixture is now ignited. The expanding gases drive the piston downward, resulting in the third stroke. On the fourth stroke, the piston is moved upwards again. The resulting force pushes out the burnt mixture through the exhaust port. This process is repeated continuously. There is a crankshaft attached to the piston, which in turn drives the propeller, helping the aircraft to move forward.

Turboprops: They are a type of propellor aircraft.
But the main thing in the turboprop is that, the propeller is driven by a Jet engine instead of a piston engine.
Turboprop working diagram— 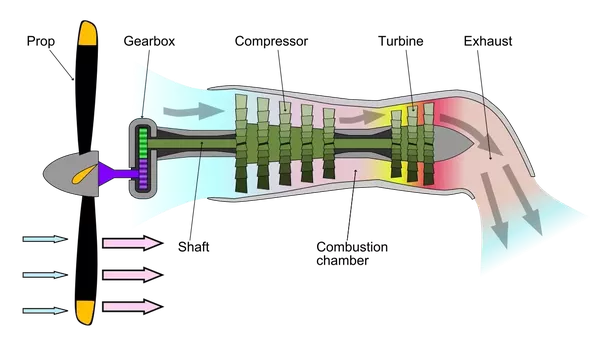 Jet Engine: Jet engine works quite differently.
Modern jet engines are turbofan engines. The fan pulls the air from the front of the engine. Most of the air passes through the bypass duct. The remaining air passes through the core. It passes through a series of compressors namely low and high pressure compressors. The air gets heated to a temperature about 450 degree celcius. Then it passes through the diffusers, where the speed of the air is slowed down. The fuel is added in this hot air and the fuel-air mixture starts burning furiously. The temperature inside the combustion chamber reaches up to 2000 degree celcius. The expanding gases now pass through the high and low pressure turbines. The energy is extracted from the gases to spin the large fan at the front, pulling air. The gases pass out of the engine from the core. The exhaust air from the bypass duct and the core contribute to the thrust.
Most of the thrust is contributed by the bypass air.
The main difference between a turbojet and a turbofan is that turbojet do not have a fan at the front. Jet engine is based on Newton’s Third Law of Motion. The exhaust gases rush out of the nozzle at a speed of 340 m/s to 400 m/s. This force has an equal and opposite reaction on the engine pushing the aircraft forward. Thrust of jet engines range from about 22000 Newtons for the Rolls Royce Ghost Turbojet of the De Havilland DH106 Comet to 569000 Newtons for the General Electric GE 90-
115B of the Boeing 777–300 ER.
A Jet Engine—
Turbojet 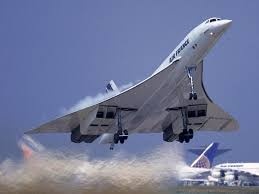 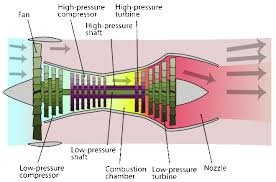 A turbofan powered aircraft: Airbus A340–642 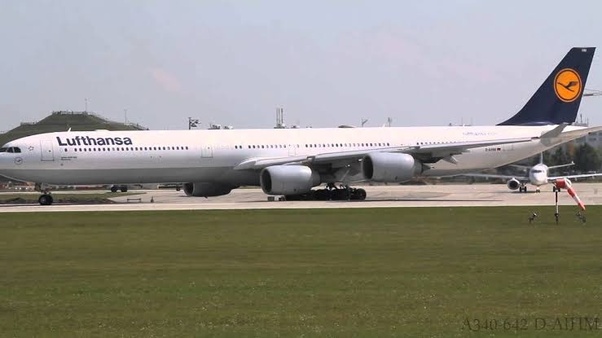