Different Kinds & Types of Aircraft
(Courtesy General Aviation Serves America web site)
General Aviation (GA) aircraft come in all shapes, sizes, and prices. Many used airplanes bought and sold in the United States today cost no more than an SUV, and some cost as little as a used car. From ultralights to helicopters to private planes to corporate jets, there’s a different kind of aircraft for every type of flying, as well every size budget.
Single-Engine Piston

As their name implies, “singles” have only one piston engine, usually mounted at the nose of the airplane using a propeller to drive the airplane. When the engine is mounted at the back, it’s called a pusher. These aircraft comprise nearly 68 percent of the GA fleet. Pilots who are certificated (licensed) to fly these airplanes will have a single-engine land rating (SEL).
Business Jets

These range in size from small seven-person jets like the Learjet 35A to the Boeing business jet that is based upon the 737 airliner. Most, however, seat about nine people and operate over distances of a few hundred to 1,500 miles.
Far from being a luxury, today’s corporate jet ferries tens of thousands of replacement parts, customers, and mid-level employees for companies of all sizes. All save time and money by using America’s General Aviation (GA) business fleet to avoid airlines delays and their congested hub-based route systems. Turbojet (jet) aircraft comprise 4 percent of the GA fleet.
Tricycle Gear

After World War II, the industry began to make widespread use of a design that put the two main landing gear a bit further back on the aircraft under the wing, with a steerable nosewheel in the front. The result resembles the arrangement one would see on a child’s tricycle, hence the term “tricycle gear.” These airplanes sit level on the ground and are easier to operate than a taildragger.
Amphibians
Amphibians are like floatplanes, except they also feature retractable wheels for operating from paved runways or grass strips.
Taildraggers

Before World War II, most airplanes had their two main landing gear and wheels — otherwise known as “the mains” — toward the front of the airplane and a small tailwheel under the tail. On the ground, these airplanes sit with their tails low to the ground, hence the name “taildragger.”
Taildraggers excel at flying from primitive dirt or grass strips, so they’re very popular in wilderness areas and Alaska (see video). However, these airplanes are harder to taxi, takeoff, and land than a standard “tricycle” gear airplane with a nosewheel in the front. The Federal Aviation Administration (FAA) requires pilots who want to fly these airplanes to get special training and a logbook endorsement from an FAA certificated flight instructor.
Helicopters

Helicopters were first conceived by Leonardo da Vinci. Today, they perform a wide range of lifesaving roles, as well as roles in filmmaking, police work, and agriculture. Helicopters couple their engines to an overhead rotor that serves as the helicopter’s rotating wing. This allows them to take off, hover, and land vertically. Rotorcraft, including gyroplanes, make up roughly 3 percent of the GA fleet.
Tiltrotors

These aircraft combine the vertical takeoff, hover, and landing capabilities of a helicopter with the forward speed of a turboprop. Their engines and propellers tilt up to form the rotors for vertical flight and tilt forward to create propulsion for fast forward flight.
Ultralights
As the name implies, these simple and fun aircraft are lightweight, carry no more than 5 gallons of fuel, travel no faster than 63 mph, and land at slow speeds. The Federal Aviation Administration (FAA) also classifies hang gliders and powered parachutes as ultralights. Most ultralights are built or assembled from factory-made kits using FAA-approved designs. They’re a fun and affordable way to taste the joy of flight.
Light Sport Aircraft

There is an ever-growing crop of light-sport aircraft (LSA) emerging within the U. S. aviation marketplace. Many of these aircraft have been flying in Europe and elsewhere in the world for years but are now making their debuts in America.
Multiengine Piston
These airplanes have two or more piston engines using propellers to drive the airplane. They offer more speed and performance than most singles, cost more to buy and operate, require advanced training and a special FAA rating to fly, and offer the redundancy of a second engine. They comprise 8 percent of the GA fleet. Pilots who are certificated (licensed) to fly these planes will have a multiengine land rating (MEL).
Turboprops

These airplanes use a gas turbine (jet) engine, coupled through a transmission, to drive the blades of a conventional propeller. They combine the reliability of a jet engine with the short takeoff and landing performance of a propeller-driven airplane.
Many have two engines. Yet, because of the incredible reliability of today’s turbine engines, a growing number use only one turboprop engine mounted on the nose. Turboprops comprise about 3 percent of the GA fleet.
Floatplanes or Seaplanes

These airplanes either have floats instead of wheeled-landing gear or their hull is shaped like that of a boat, allowing them to take off from water or land on water. These are a common sight in Alaska and in wilderness areas where fishermen or sportsmen want to reach remote lakes. Pilots who are certificated to fly these airplanes will have a single- or multiengine seaplane rating (SES or MES).
Biplanes
Biplanes have two main wings. This type of airplane was very common before World War II and continues to be popular today among stunt and agricultural pilots. The vast majority of biplanes are also taildraggers. They make excellent aerobatic airplanes and can be seen at picturesque grass airstrips throughout America.
Gliders
These aircraft use the wind and rising columns of warm air for lift. Like birds, they can soar for great distances and to great heights. The world’s first successful airplanes were all gliders, including many built by the Wright Brothers.
Gliders are towed aloft by powered airplanes, a winch, or a small retractable engine.
Gyroplanes

Gyroplanes use an airplane engine and small propeller to push or pull themselves forward. As they move, air rushing up through the free-wheeling overhead rotor blades causes the rotor to rotate. The rotating rotor serves as the gyroplane’s rotating wing. They can take off and land in very short distances, yet they are less complex and therefore less costly to operate than a helicopter.
Kitbuilts or Homebuilts

The Wright Brothers’ original airplanes were all homebuilts, meaning that they were built at home by aviation enthusiasts and entrepreneurs.
Today, under strict Federal Aviation Administration guidelines and stringent FAA inspections, many thousands of airplanes, gliders, helicopters, and other experimental flying machines are built by individuals in their basements and garages all across America. Most are built or assembled from factory-made kits using FAA-approved designs. Some can be very sophisticated.
Powered Parachutes

This is as simple and affordable as it gets. You strap a motor with a propeller on your back, then hang from a parachute while you get a true bird’s-eye view of the world around you. If the motor quits, you float gently to earth in your parachute. Some large versions seat two people.
Airships (Blimps & Dirigibles)
Like balloons, airships use hot air and/or lighter-than-air gases to generate lift. But unlike balloons, they also carry one or more engines and propellers to generate thrust and have aerodynamic control surfaces for steering. This allows them to move through the sky at will, without being beholden to the wind.
There are three different types of airships: non-rigid, semi-rigid, and rigid. Non-rigid or semi-rigid airships, like the Goodyear blimp, use only the pressure of their lifting gases to maintain their shape. Rigid airships like the infamous Hindenburg have full-envelope metal interior framing.

Re: Kinds of aeroplane 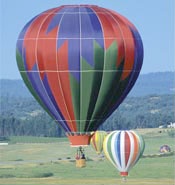 Hot air balloons were first used by the pre-Incan Nazca civilization more than 2,000 years ago.
Balloons use hot air and/or lighter-than-air gases to generate lift. They are carried across the landscape by the winds aloft. Most carry three or four people, although some larger models used for commercial services carry more. Some can be seen in the shape of advertising products.

Similar topics
» What are the parts of an aeroplane?